The animal food industry is essential. A recent report found that America’s domestic livestock and pets chowed down nearly 284 million tons of safe, high quality and nutritious food in 2019, helping keep our food supply chain stable. The report, updated from its 2017 counterpart by the Institute for Feed Education and Research (IFEEDER), also provides expert economic analysis on how the coronavirus pandemic may impact the industry’s growth over the next five years.

IFEEDER recently worked to quantify exactly how much animal food that domestic livestock and pets consume throughout the various stages of their lives, adjusting for regional feed differences and life stages. Utilizing the U.S. Department of Agriculture’s November 2020 data, DIS also established a baseline of the value and volume of feed for six major categories of livestock and poultry (i.e., broilers, layers, turkeys, hogs, dairy cows and beef cattle) and then provided three, forward-looking economic scenarios for the feed sector beyond the COVID-19 crisis. 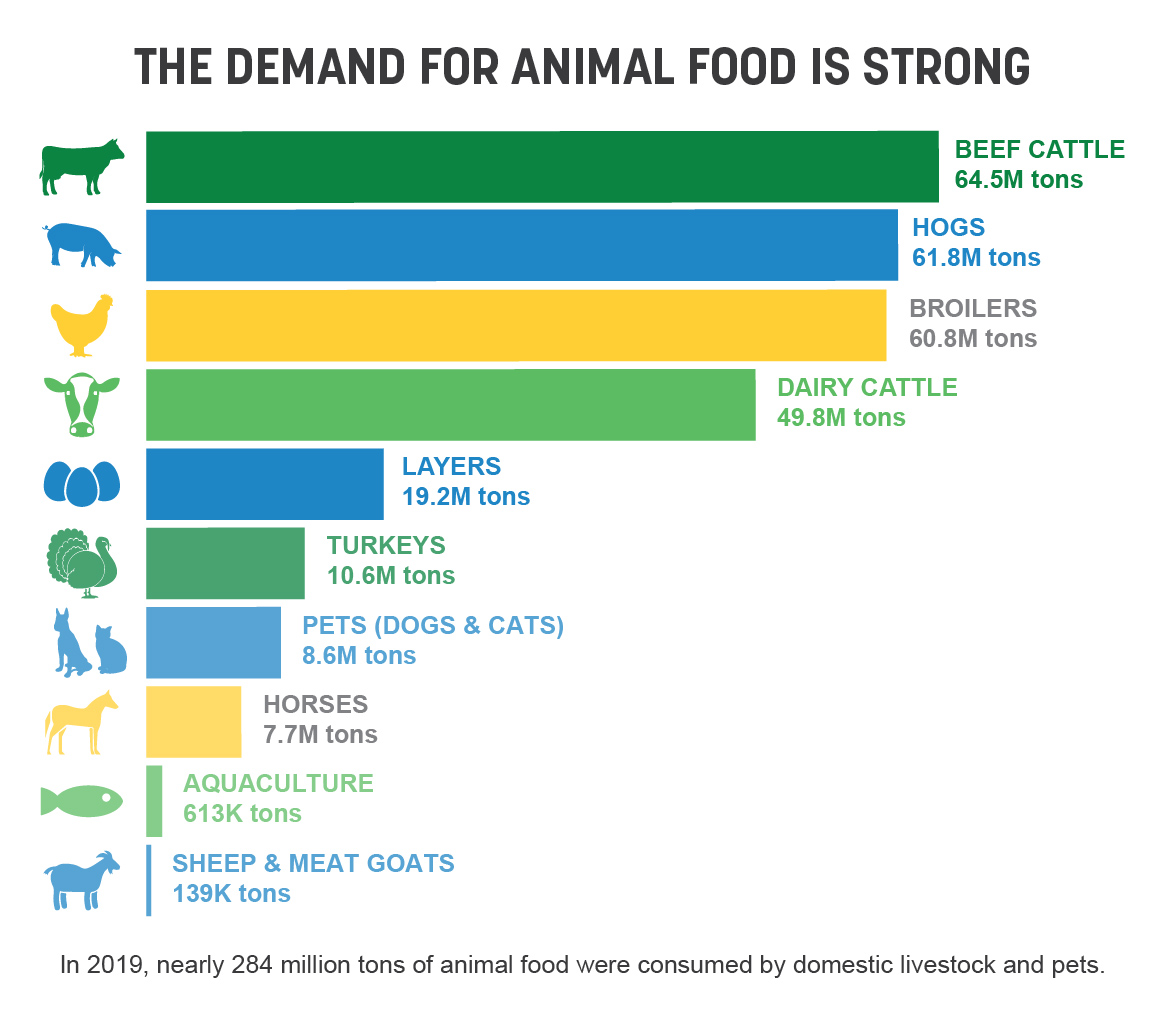 Corn, the most abundantly produced crop in the United States, made up slightly more than half (52%) of the total amount of compounded feed consumed, and when combined with soybean meal (12%) and dried distillers’ grains with solubles (DDGs) (11%), represented more than 75% of all feed tonnage consumed in 2019. DIS also reported on a number of other ingredients used in animal diets, including wheat middlings and wheat bran (3%), animal byproduct meals (3%), corn gluten feed/meal (2%), canola meal (2%), animal fats (2%), other processed plant byproducts (1%) and others.

DIS considered six categories of domestic livestock production for this part of the report, including broilers, layers, turkeys, hogs, dairy cows and beef cattle. DIS estimated the baseline consumption at the beginning of 2020 at 252.6 million tons (excluding forages and roughages) with an estimated value of $66.7 billion, under normal production circumstances without the pandemic; with COVID-19, the consumption rate fell roughly 1.7% to an estimated 248.4 million tons, a difference of 4.2 million tons less feed consumed worth $1.6 billion, leaving the industry with a total post-COVID-19 value of $47.5 billion.

In a worst-case scenario, where the industry encounters further disruptions in processing and slaughter numbers or potential trade issues, DIS estimated 2025 animal food consumption could further decrease 4.5% to 237.2 million tons at a value of $45.4 billion. In an expected-case scenario, where the industry continues business as usual without any further major disruptions, DIS estimated that by 2025 animal food consumption could increase 2.5% to 254.6 million tons worth roughly $48.8 billion. In a best-case scenario, where the hotel, retail and institution sectors of the economy recover quickly and travel and trade conditions dramatically improve, DIS estimated that by 2025 feed consumption could increase 5.9.% to 263.1 million tons, valued at $50.4 billion. 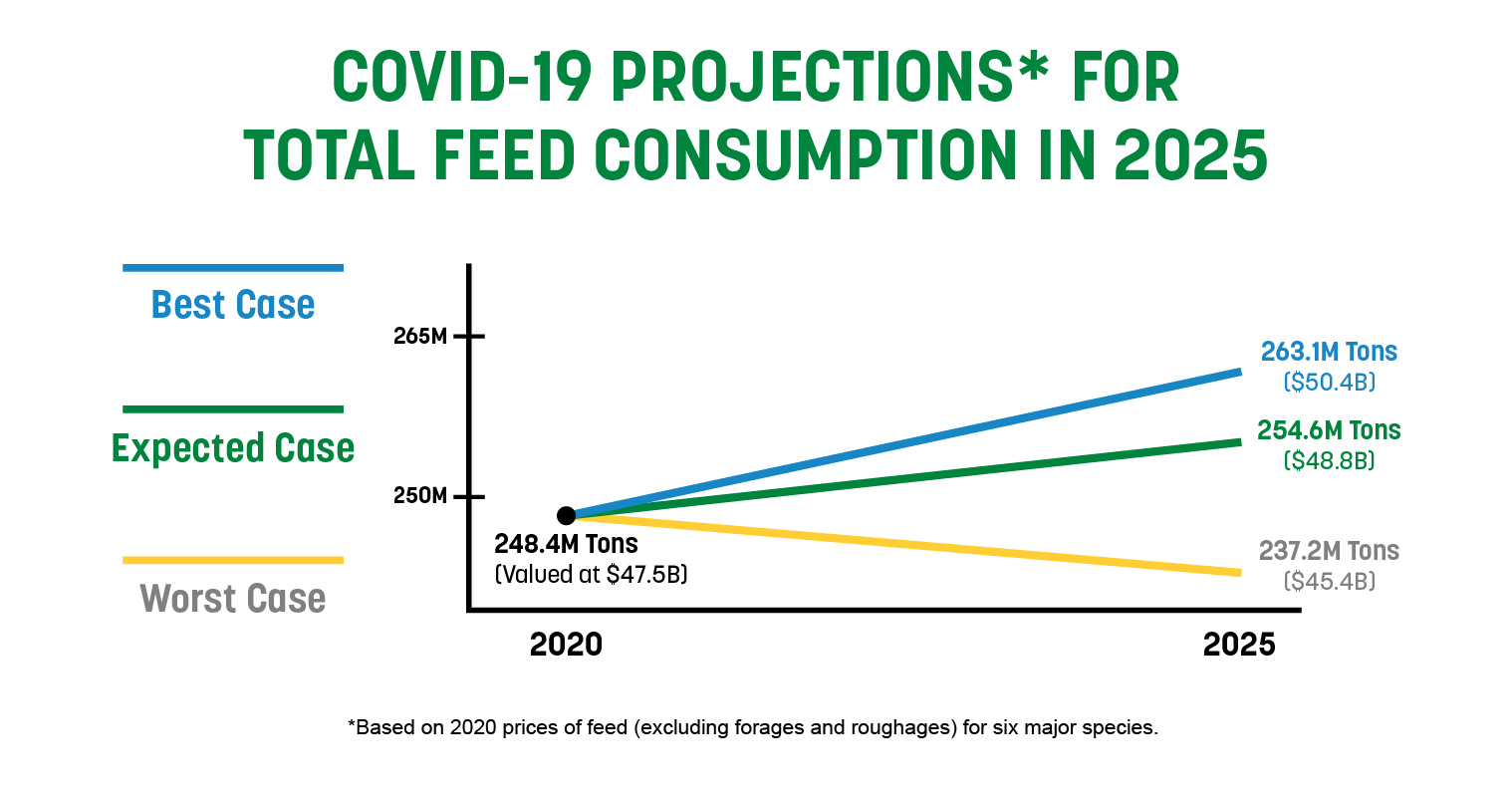 Learn more about the animal food consumed in your state.