More than 6,200 manufacturing facilities across America produce millions of tons of animal food annually, helping farmers and ranchers keep their livestock, poultry and aquaculture growing well and Americans’ pets healthy. But that is not all they do. These facilities generate billions of dollars in sales and taxes and employ hundreds of thousands of hard-working Americans. 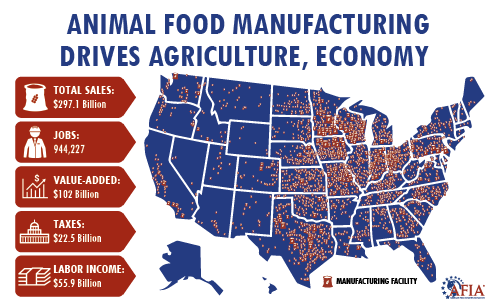 The Institute for Feed Education and Research (IFEEDER), the American Feed Industry Association’s public charity, recently quantified exactly how vital the animal food industry is to the U.S. economy. Working with Decision Innovation Solutions, an economic research and analysis firm, IFEEDER analyzed 2016 economic data from a variety of sources to develop an overall picture of the entire animal food manufacturing industry’s contribution to the U.S. economy.

Learn more about the industry’s economic impact in your state and congressional district.