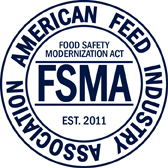 On Jan. 4, 2011, former President Barack Obama signed into law one of the most sweeping reforms of the country’s food safety laws since the 1950s – the Food Safety Modernization Act (FSMA). The law, which enjoyed bipartisan support in Congress and initial support from the animal food industry, shifted the country’s thinking about food safety for human and animal food from responding to food safety issues to preventing them.

The law provides the Food and Drug Administration with new authorities and requirements for both the human and animal food industries, including the promulgation of rules for preventive controls, development of performance standards, strengthening of administrative detention rules and mandatory recall authority of adulterated products.

FSMA impacts all involved in the manufacturing of feed and pet food, from ingredient processors to animal food manufacturers to feed and ingredient importers to the transportation industry – all members of the American Feed Industry Association. As such, the AFIA played an active role in providing comments to the FDA on its various rulemaking proposals and working with other feed organizations to better understand the impact of FSMA’s final animal food rule.

The baseline requirement for compliance with FSMA is the Bioterrorism Preparedness and Response Act of 2002, which requires facilities that manufacture, process, pack, or hold food to register as a food facility with FDA. The act also declares that the FDA is permitted to inspect any registered facility. All registered facilities must comply with FSMA unless an exemption applies.

CGMPs are routine steps conducted by on-site staff and are based on observations. Preventive controls generally require steps to measure and monitor hazards that have been determined to be a risk for a facility.

As a result of FSMA, food importers must meet U.S. standards and verify that their foreign suppliers have adequate preventive controls in place to ensure food safety under the Foreign Supplier Verification Program regulations. Firms can hire accredited qualified third-party auditors to certify that foreign food facilities are complying with U.S. food safety standards.

One of the components of FSMA is increased transparency around regulatory actions. The public facing FDA-TRACK: Food Safety Dashboard supports timely review of all FSMA related inspections conducted by FDA staff.

How Does FSMA Work for the Animal Food Industry?

Four of FSMA’s seven final rules impact the animal food industry. Learn more about them on this page.