The American Feed Industry Association applauds the efforts made by the House Democrats’ Trade Working Group and U.S. Trade Representative Robert Lighthizer to resolve the remaining provisions in the U.S.-Mexico-Canada Agreement (USMCA) and for reaching a deal. 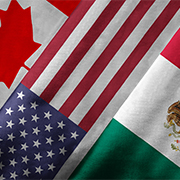 “Now, with the ratification window quickly closing on 2019 and an election year looming, AFIA strongly urges Congress to bring the agreement to a vote,” said Constance Cullman, AFIA’s president and CEO. “Ratifying the agreement will allow U.S. animal food producers to continue to remain competitive in the region while strengthening regulatory engagement and commitments among the three countries.”

In an ever-increasing global economy, our neighbors to the north and south still have the largest impact on the feed industry and on American agriculture as a whole. Mexico and Canada respectively represent our country's largest and second largest export markets for feed, feed ingredients and pet food. Since the North American Free Trade Agreement's (NAFTA) implementation, animal food exports to Canada and Mexico have almost tripled, growing from $669 million in 1993 to $3.2 billion in 2018. While NAFTA has been a linchpin in the success of the feed industry for the past quarter-century, the USMCA brings new labor provisions to protect U.S. jobs and provides enforceable sanitary and phytosanitary obligations that build upon World Trade Organization rights and obligations.