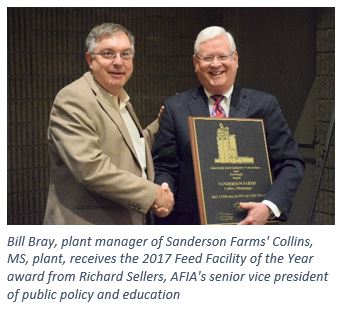 The American Feed Industry Association is proud to announce that Sanderson Farms of Collins, Mississippi, has been named the 2017 Feed Facility of the Year (FFY). Gary Huddleston, AFIA’s director of feed manufacturing and regulatory affairs, announced the winner during AFIA’s Feed Education Program, being held today as part of the International Production & Processing Expo, happening this week in Atlanta, Georgia.

Cosponsored by AFIA and Feedstuffs, the FFY award recognizes overall excellence in feed manufacturing operations. It emphasizes the company’s commitment to safety, quality, regulatory compliance and employee development and highlights the facility’s overall operating efficiencies. To date, only 32 facilities have received this industry best practices award.

“Sanderson Farms demonstrates excellence in each of the areas the Feed Facility of the Year program measures,” said AFIA’s President and CEO Joel G. Newman. “They quickly rose to the top of this year’s competition, and we are happy to present the company with this award.”

Sanderson Farms’ Collins facility produces more than 400,000 tons of poultry feed each year. As one of Sanderson Farms’ eight feed mills, the facility processes 455 acres-worth of corn each day. It also serves as the grain delivery point for the company’s Laurel, Mississippi, facility.

There are many factors that helped Sanderson Farms achieve the FFY award, including some of its work to boost employee engagement and promote morale. According to feed mill manager William “Bill” Bray, employees are included in daily conversations about safety, and the company’s training programs allow supervisors to assist employees by providing personal attention. Facility personnel are encouraged to offer suggestions for improvements while reviewing and implementing changes. 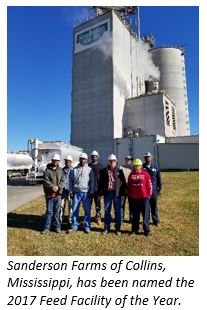 “We participate in many functions at the local level and encourage our employees to become involved in their community,” Bray said.

Formerly the Feed Mill of the Year Award, AFIA and Feedstuffs modified the program in 2016, and it is now recognized as a first-class benchmarking program for the animal food industry. Representing each of the several types of feed manufacturing facilities within AFIA’s membership, the improved format compares and recognizes top-performing facilities in four categories: commercial dry livestock, integrator, liquid feed and premix. From those, the FFY award is selected.

AFIA and Feedstuffs have conducted the FFY, and its predecessor program, since 1985, recognizing 70 companies for outstanding performance in animal food manufacturing. More information on the FFY program, as well as a list of past winners, can be found on AFIA’s website.