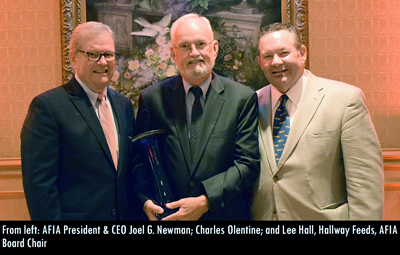 The American Feed Industry Association honored Charles Olentine, Ph.D., owner and president of Consult-NC, with its Distinguished Service Award in recognition of his lifelong service to the industry. AFIA’s Board of Directors presented the award May 15 in Arlington, Va.

Since 1981, AFIA has given the Distinguished Service Award, the industry’s highest honor, to those elite members of the U.S. feed industry who have provided outstanding support to the association and the entire feed industry throughout their careers. To date, 34 individuals have received the award.

“Dr. Olentine has been a pivotal thought leader in the agriculture industry for many years,” said AFIA’s President and CEO Joel G. Newman. “From his uncanny ability to report on emerging issues that impact animal food manufacturers and producers, to his forward-thinking in bringing two industry groups together, and create what is now one of the largest annual trade shows in agriculture today. He is certainly deserving of the industry’s highest honor that I have the privilege of recognizing him with today.”

Olentine began his career in the agriculture publishing industry in 1978 when he went to work as an editorial director for WATT Publishing. He later went on to serve as the publication’s vice president and publisher from 1987 until 2004. During that time, he also served as the director of marketing and communications for the National Feed Ingredients Association, which merged with AFIA in 1992.

In 2004, Olentine left WATT to serve as the executive vice president of the U.S. Poultry & Egg Association, where he worked until his retirement in 2015. In this role, he brought together USPOULTRY’s and AFIA’s trade shows to ultimately form the International Production & Processing Expo in 2007, as well as the addition of the North American Meat Institute’s trade show to IPPE in 2013.

Over his career, Olentine authored more than 200 editorial columns and features in the agricultural press. He is a regular blogger for Trade Show News Network, co-authored Feed and Nutrition text, contributed a chapter in AFIA’s Feed Manufacturing Technology version IV, and assisted in the development of other books.

Olentine served on the Atlanta Advisory Board from 2009-2011 and was named USPOULTRY’s “Workhorse of the Year” in 2013. He is a past board member of the International Association of Exhibitions and Events for the southeast regional chapter, served on the Sterling, Ill., school board for six years, and is highly involved in his local church.