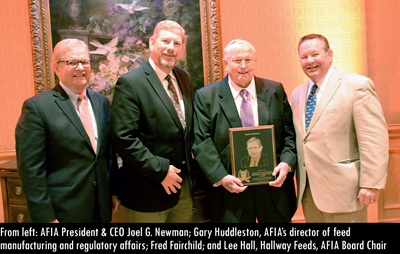 The American Feed Industry Association honored Fred Fairchild with the AFIA-Kansas State University Feed Manufacturing Lifetime Achievement Award for his contributions to the feed industry through business and education. AFIA President and CEO Joel G. Newman presented the award to Fairchild at AFIA’s Board of Directors dinner May 15 in Arlington, Va.

The award recognizes and honors U.S. animal food industry retirees, or those who are no longer serving the industry or allied industries, who have made a significant contribution to the animal food manufacturing business in the United States throughout their careers. Individuals are nominated in the areas of business, science and technology. AFIA and KSU first presented the award in 1995, and only 19 individuals have received the award to date.

“With more than 50 years of experience in the feed and grain industry and 24 years of involvement with AFIA and its committees, Fred Fairchild is more than deserving of this award,” said Gary Huddleston, AFIA’s director of feed manufacturing and regulatory affairs. “He contributed to three Feed Manufacturing Technology textbooks and was instrumental in making the partnership between AFIA and Kansas State University as strong as it is today.”

Fairchild began his career in the industry working for various construction, feed and grain companies. In addition to his experience in the United States, he has worked on grain storage and feed mill projects in Turkey, Pakistan, Egypt and China. In 1994, he became a professor in KSU’s Department of Grain Science, where he remained until his retirement in June 2013. KSU is the only U.S. university to offer a bachelor of science in feed manufacturing. In addition, AFIA offers its online feed manufacturing course, which has educated more than 450 national and international students to date, through KSU. Fairchild now serves as a professor emeritus in the department.

From 1987-2011, Fairchild was involved in AFIA’s Manufacturing and Technology, Hall of Fame, and Technology and Textbook Committees, as well as the Centennial Task Force. He contributed multiple chapters to the Feed Manufacturing Technology III, IV and V textbooks, and he wrote more than 120 articles for the feed, grain and milling industries. He served as a project manager for four buildings of the KSU grain science campus, including the International Grains Program Conference Center, the Bioprocessing and Value Added Program Building, the Hal Ross Flour Mill and the O.H. Kruse Feed Technology Innovation Center.

Fairchild is a lifelong educator who has volunteered his time with various civic groups, including the Lions Club, Kiwanis and the Boy Scouts of America, which recently honored him with the Silver Beaver Award, and his church.