“These awards recognize leaders who have provided significant contributions in animal science and nutrition,” said Paul Davis, Ph.D., AFIA’s director of quality, animal food safety and education. “Drs. Lean and Horst have dedicated their careers to dairy science research, and they are both well-deserving of these awards.” 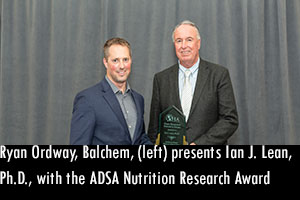 ADSA Nutrition Research Award
Lean is the founder and managing director of Scibus, an agricultural research and consulting firm in Australia. Over his career, he has worked as a large animal veterinarian in Australia and a lecturer of clinical nutrition and cattle medicine at the University of California and the University of Sydney. He also served as the senior examiner in cattle medicine and ruminant nutrition for the Australian College of Veterinary Scientists and as president of the Australian Association of Cattle Veterinarians and the cattle chapter of the Australian College of Veterinary Scientists.

Lean has authored more than 200 scientific articles, many of which have been published in international peer-reviewed journals. He also wrote the textbook “Nutrition of Dairy Cattle.” He has spoken at major conferences in the United States, Australia, New Zealand, Canada, the United Kingdom, Argentina and South Africa. 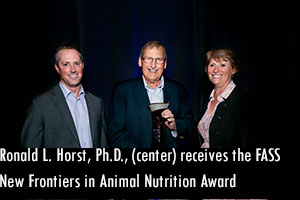 FASS New Frontiers in Animal Nutrition Award
Horst is the cofounder of Heartland Assays and GlycoMyr, two companies that focus on developing products and analytical techniques to identify and alleviate vitamin D and calcium deficiencies. He served as a research scientist for the U.S. Department of Agriculture’s National Animal Disease Center and as a professor in Iowa State University’s Department of Animal Science from 1978 through his retirement in 2006.

Both of these awards are sponsored by AFIA as part of its continuing awards program that dates back to 1948.