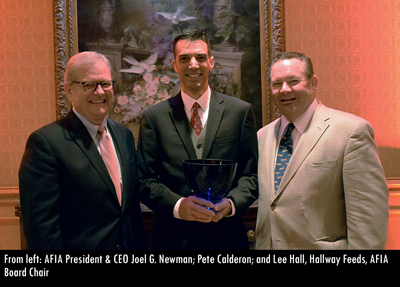 The American Feed Industry Association named Pete Calderon, general manager for Scott Equipment, as its Member of the Year during a ceremony at its Board of Directors dinner May 15 in Arlington, Va.

The Member of the Year award is presented to an AFIA member who exhibits outstanding support in achieving the organization’s goals and objectives throughout the year. With the exception of the 83 members of the Food Safety Modernization Act working group who received the award in 2014, only 38 individuals have been honored prior to this year.

Calderon has worked with AFIA’s Equipment Manufacturers Committee for several years and chaired the committee in 2011-12. Over the past year, he played a critical role in AFIA’s work with ISO/TC-293, the technical committee within the International Organization for Standardization (ISO) that is developing feed machinery standards, work that was initiated by China. As a member of the U.S. Technical Advisory Group (TAG), he spent countless hours reviewing documents and participating in workgroup calls as well as recruiting other TAG members. He also spoke on the subject at the export seminar, held as part of the International Production & Processing Expo this past January.

“Pete has played an integral role this year in participating in the ISO/TC-293 project, which is developing international feed machinery standards on behalf of the industry,” said AFIA’s President and CEO Joel G. Newman. “We appreciate his leadership throughout this project and are proud to present him with this award.”

Calderon has also supported AFIA through various events, including raising sponsorship support for the 2017 Equipment Manufacturers Conference, which funds the committee’s scholarship each year, as well as exhibiting and participating at the annual IPPE.

He holds a bachelor’s degree in agriculture economics from Kansas State University.