The American Feed Industry Association’s Board of Directors met May 15-16 for its annual spring meeting in the nation’s capital, where they elected a new chair and several Board and Executive Committee members, discussed priority issues impacting the animal food industry with their legislators and conducted other official business.

The Board, which is comprised of 48 industry representatives, spoke with members of Congress about the lengthy and costly animal food ingredient review and approval process, some of the association’s international trade priorities, and critical animal research and health provisions that the industry would like to see included in the 2018 Farm Bill. They also heard from Rep. David Rouzer, R-N.C., who spoke about the upcoming farm bill, trade and the state of U.S. agriculture. 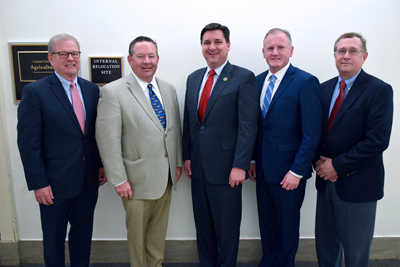 “Hopefully, at the end of this week, we’ll come out unscathed on a farm bill,” Rouzer told the Board. Even if the House bill does not move forward, Rouzer seemed confident that Congress would pass a farm bill soon. “We’ll have a farm bill one way or another, it just may not be this iteration of it.”

On the topic of trade, Rouzer told the Board that he is “not alarmed by the rhetoric used or proposed tariffs” by this administration on China, saying he believes it is a tactic used as “a point of negotiation” by the president. He also added that he believes the United States will come to an agreement on the North American Free Trade Agreement soon, saying that “if Trump was going to get out of NAFTA, he would have done it already.”

As part of the official business meeting, the Board of Directors recognized Lee Hall of Hallway Feeds for his leadership as the association’s Board chairman during the 2017-18 year. Hall now transitions into his one-year chairmanship of the Institute for Feed Education and Research’s (IFEEDER) Board of Trustees.

“Lee has been a great leader this past year, bringing his own perspective and energy to the Board,” said AFIA President and CEO Joel G. Newman. “I look forward to seeing him continue that leadership throughout his year as chair of the IFEEDER Board of Trustees.” 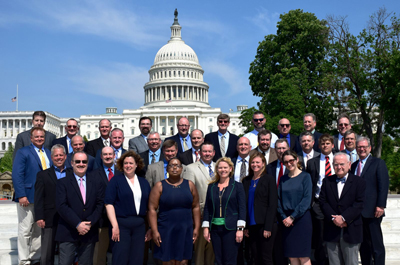 In addition, the Board officially elected Bruce Crutcher, managing director for Micronutrients USA, LLC, as its new chairman. His one-year term is effective May 1 through the end of AFIA’s fiscal year April 30, 2019.

“As a long-time member and supporter of both AFIA and IFEEDER, who also led the establishment of the AFIA Sustainability Initiative, , I’m excited about the leadership Bruce will bring  as the new chairman,” said Newman.

The Board voted to accept the nomination of Tim Belstra, chairman of Belstra Milling Co., to become chair-elect of the organization. Belstra will succeed Crutcher in May 2019.