“Each year, AFIA honors leaders who have significantly advanced animal nutrition through their research,” said Paul Davis, Ph.D., AFIA’s director of quality, animal food safety and education. “Drs. Loor and Zijlstra have spent their careers researching cattle and swine nutrition and providing guidance to students in these fields, exemplifying the purpose of these awards.” 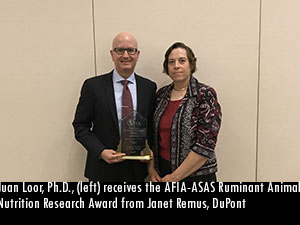 Ruminant Animal Nutrition Research Award
Loor is an associate professor of animal sciences and nutritional sciences at the University of Illinois. He is known for his innovative research that merged ruminant nutrition with molecular biology into cattle nutrigenomics. This discipline centers on nutritional management of the periparturient—immediately before and after birth—dairy cow and the role of maternal and early post-natal nutrition on intramuscular fat development in beef cattle.

Loor has trained 20 doctorate and 12 master’s students and six post-doctoral fellows, as well as mentored 25 foreign graduate students. Since 2006, he and his mentees have published more than 200 peer-reviewed papers that have received more than 3,700 citations. 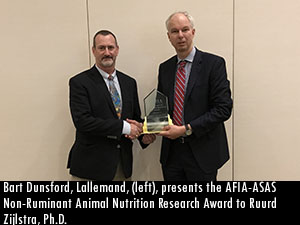 Non-Ruminant Animal Nutrition Research Award
Zijlstra is a professor of swine and carbohydrate nutrition at the University of Alberta in Canada, where he also serves as chair of the Department of Agricultural, Food and Nutritional Science. His research is largely focused on unique aspects of carbohydrate nutrition, the nutritional quality of coproducts in pigs, feed quality evaluation techniques, and dietary means to enhance gut health in pigs.

Zijlstra has supervised 24 graduate students and 16 post-doctoral fellows. He has co-authored 150 peer-reviewed papers and 10 book chapters and has presented 146 invited papers. He has served on the editorial boards of numerous journals, been a member of the organizing committee of the Banff Pork Seminar since 2005, and as a member of the organizing committee for the 2012 Digestive Physiology of Pigs meeting.

Zijlstra holds a doctorate from the University of Illinois and degrees from Wageningen University and Research in the Netherlands. Bart Dunsford of Lallemand presented Zijlstra the award.

The two awards are sponsored by AFIA as part of its continuing awards program that dates back to 1948.