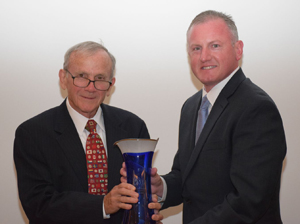 The American Feed Industry Association honored Bob Brill with its 2017 Distinguished Service Award for his life-long contributions to the feed industry at AFIA’s Board of Directors dinner held May 9 in Arlington, Virginia.

The Distinguished Service Award is AFIA’s highest honor. The award recipients are elite members of the U.S. feed industry that have provided outstanding support to AFIA and the entire feed industry throughout their careers.

Brill began his career at IBM, where he was introduced to the concept of linear programming. He then started Software Dynamics Inc., which used that concept for least-cost feed formulation. This revolutionized the feed industry, saving millions of dollars by allowing all nutritional requirements from an array of ingredients to be met in the best cost combination.

After selling his first company, he began Brill Corporation, which began work with mini computers, and later was the first company to offer linear programming for personal computers. This company expanded into South America, bringing the technology into the broader feed industry. Brill Corporation was sold in the late 1990s. Brill then founded Brilliant Alternatives, where he focused on bringing his technology into more international markets, especially Asia.

“Bob has been a great asset to the success of AFIA, as well as the U.S. and global feed industry,” said AFIA President and CEO Joel G. Newman. “He is a world-class, renowned software expert who helped to revolutionize the feed industry.”